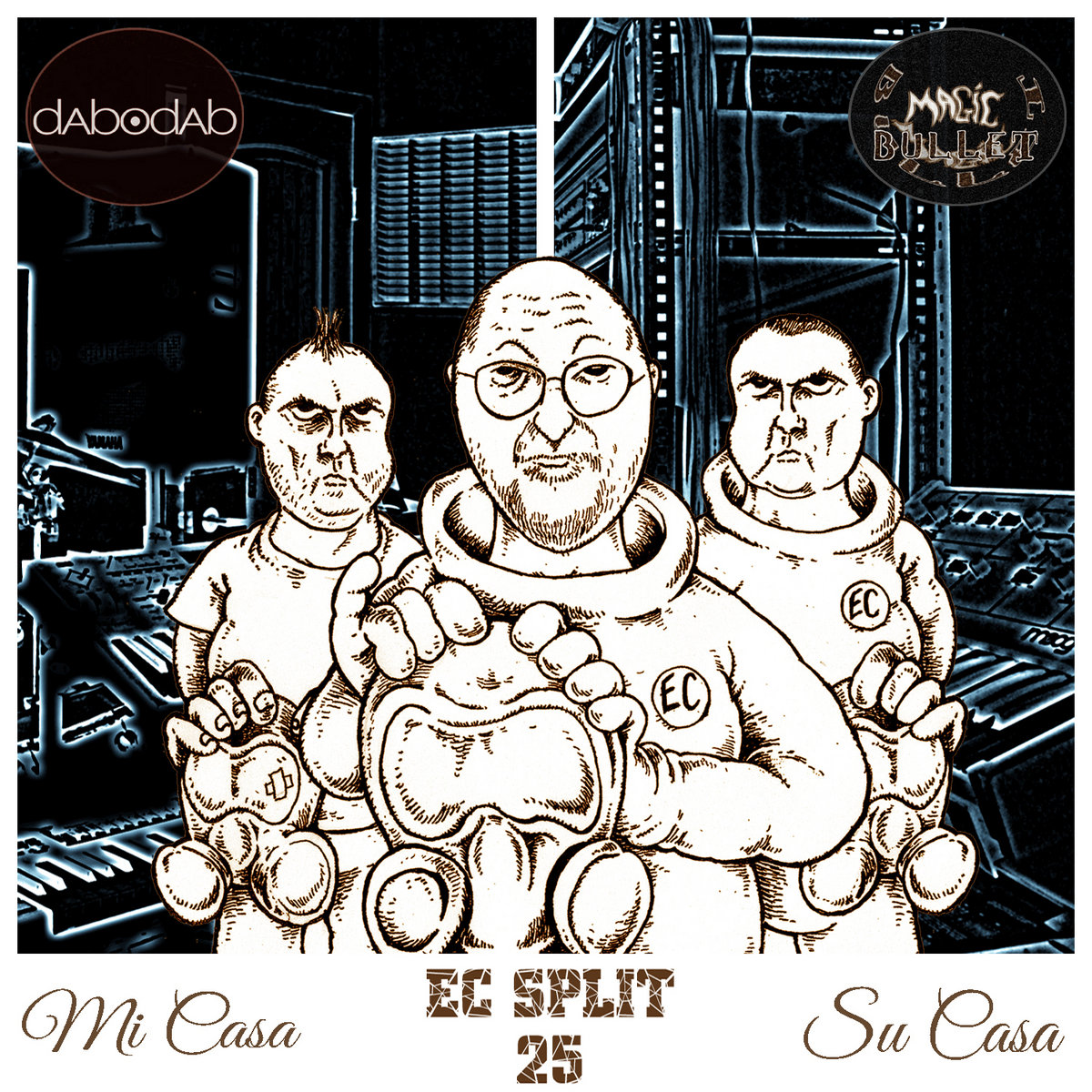 Hal McGee’s Electronic Cottage has released a a series of split albums by 50+ experimental recording artists and dabodab’s latest recording is a split with Magic Bullet (a project by Mick Magic of Magic Moments at Twilight Time fame). Mick has run the MMATT label and website for 30+ years. So he’s an old hometaper sort like truly me.

Mick’s idea was that an alien form wanted to know about his house, wanted to listen to it. His approach was to go from room to room with its different sounds woven into a series of sonic pieces. I loved it.

My piece evolved in my head over the course of time between the project’s announcement and call for submissions right up to the deadline cut, much to Mick’s evident chagrin. At some point it revolved around a recording I had made while visiting my parents. Mom, eighty-five, and dad, past ninety. We talk about their lives, our lives, and I collect conversations. I have a trove of them. I highly recommend you do the same.

Sometimes I’ll proffer a question from a tiny book of questions I found in a second shop. One such question asked about the house mom grew up in and from this recording I extracted close to eighty snippets of phrases; mainly the last house she was in from sixth grade to when she married my father at seventeen. This is the house I used to visit as a child when we traveled to my grandparent’s house.

Hal’s specifications for the project required each split artist to create a new work of 30 minutes give or take a minute. So I began by improvising a 30 minute track on a Korg Wavestate synthesizer. Then I distributed mom’s snippets randomly across the length of the recording, dropping them one by one on the timeline, forward and back.

Other instruments include Obsidian, a new sample instrument in Arcade by Output. Logic’s Step FX and Chromaverb plugins were used as well as Scanner, a Reaktor instrument from Native Instruments.

I recently purchased a toy Schoenhut piano and sampled it with a Zoom H5N recorder. It’s heard toward the end of the recording.

Skit and I play and do stuff to; two telephones, a tractor, the Irish sea and its winds, two vacuum cleaners, a boiler, a steam iron, several running taps, a tumble dryer, a washing machine, two dehumidifiers, a dishwasher, a cooker hood, a kettle, a microwave, a fan oven, a wind-up gramophone, a fan, a television, 2 Solpadeine tablets dissolving in a beaker of water (*other painkillers are available!), an extractor fan, a shower, a WC, an electric toothbrush, a hairdryer, an electric shaver and its cleaning / charging station, ‘whistle lips’, a toy xylophone, a toy recorder, a battery operated guitar toy, a Peppa Pig trumpet toy, a paper shredder and a printer.

I live in a house called Asgard in the village of Knott End-On-Sea in Lancashire, England, as does Skit, my partner in the band. But we do not live in the same house, his is somewhere beyond several trans-dimensional voids in a parallel reality. We are told by an ageing scientist that there are 25 such parallel dimensions, and in one of these, our house is occupied by an American writer of some repute. This is the story of his visit to our Asgard, and how the portal device he brought with him allowed us to look back through in to his. And he did not just wish to see our house, he also wished to hear it. What else could we say but “Mi casa, su casa”…

Mick commissioned his longtime illustrator friend Kev Trundley (connyplankton.bandcamp.com) for the very cool cover. Mr. Magic asked me for a photo. I believe it took me longer to produce the photo than it did for Kev to create the illustration. Let’s say I’m very methodical.

Mick also put together graphic plates for each of his tracks as well as mine. These are the portal views peering into or onto our respective residences.

Purchasing the album (for as little as $1) provides you downloadable PDF’s from the both of us. Mine is a 70+ page booklet of phrases and graphics from grandma’s house. Mick’s also scripts the events on his side of the pond in details worth illuminating.

Much thanks to Mick for his enthusiastic ethic and inspiration. I was sufficiently prodded. Find more about all things very Magical at http://www.mickmagic.net/

The album is available exclusively through Electronic Cottage on Bandcamp until February 2021 and available on all the usual streaming services after that:

« and the eagle suffers the little birds to sing

dabodab is an experimental audio|visual project by Bryan Baker of Blind Mime Arts and the publisher of GAJOOB Zine. dabodab music is found wherever you may stream with custom collectible creations made to order here at dabodab.com. Over time you'll find sample packs, zines, mailart and other things too.